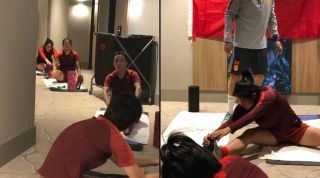 The China Women squad is reportedly being limited to training in their hotel corridors having arrived in Australia for their 2020 Olympic qualifiers.

It comes after the quarantine measures have been put in place after the coronavirus outbreak originated in Wuhan, with star player Wang Shuang not even making the trip at all as she wasn’t able to leave the city.

In turn, it hasn’t been ideal preparation for the squad but given the seriousness of the virus and the threat that it carries with the death toll rising as it continues to spread, it’s understandable as to why such measures have been put in place.

Reports claim that the quarantine will end on Wednesday while it is stressed that there are no signs of the virus within the squad, therefore it’s expected that they will play their qualifiers and ultimately the measures taken were just precautionary.

The China squad will travel to Sydney from their Brisbane hotel on Thursday ahead of games against Thailand, Chinese Tapei and Australia, and so they’ll hope that they can still get positive results despite the disruption to their preparations.

China Women's football team's fixture in the 2020 Olympic Qualifying is rescheduled: China vs Thailand, Feb 7. China vs Chinese Taipei, Feb 10. China vs Australia, Feb 12. 3 matches within 6 days. Due to quarantine, Chinese players have to train in hotel corridors after arrival. pic.twitter.com/XOHbABNWav

Wang Shuang, the star player of China women's national team, is stuck in Wuhan, her hometown, and would miss the Olympic qualifying moved to Australia. Since it is not possible to find a football pitch for self-training, she went to the rooftop to play with her brother. pic.twitter.com/ebsn8tuM4K