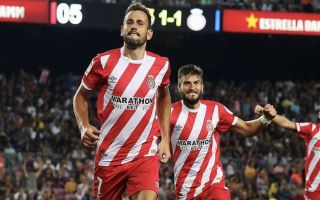 It became clear in the January window that Barcelona were a bit light up front, so it was fairly incredible to see forward players being shipped out of the team without any kind of replacements.

Abel Ruiz had looked promising for the B team but he left for Braga, while Carles Perez had featured 10 times in La Liga but found himself on the move to Roma.

On top of that Luis Suarez has been out for a while and there’s no immediate return in sight, so a report from The BBC which stated that Ousmane Dembele had torn his hamstring on his return to training came at the worst possible time.

Interestingly a story in Marca suggested that Barca could possibly sign someone on an emergency basis due to the injuries, so it was inevitable that various names would be banded about.

One of the main links seems to be with Cristhian Stuani of Girona in the Segunda. He might be familiar to Middlesbrough fans after a spell in England, but he’s been too good for the second tier this campaign with 20 goals in 22 games, while also scoring 40 goals over his past two La Liga seasons:

On the face of it this signing could’ve made sense, but it seems like the suggestion has been shot down immediately:

It’s not clear exactly why the link with City would be a problem, but they often loan players to Girona and clearly have a close working relationship, so this could come as a further blow to Barca.

As things stand, Ansu Fati is the only option alongside Messi and Griezmann, so this could be a big few months for him.

The ridiculous reason that Ansu Fati missed out on the Man of the Match after a fine display vs Villarreal September 27, 2020 22:45
FC Barcelona