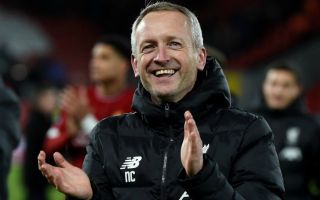 Liverpool named their youngest ever XI in all competitions in last night’s FA Cup replay victory over Shrewsbury Town.

This youthful Reds line up still had enough in them to come away with a 1-0 win over Shrewsbury, despite the absence of the first-team – including manager Jurgen Klopp – who were all away on their winter break.

MORE: Liverpool loanee booed by own fans and in trouble with club for partying too much

Remarkably as well, this is the second time this season that Liverpool have broken their club record for fielding their youngest ever XI.

According to Opta in the tweet below, the age of last night’s team was 100 days younger than the one that set the previous record in the Carabao Cup game against Aston Villa earlier this season…

19y 102d – With an average age of 19 years and 102 days, Liverpool have tonight named their youngest ever starting XI in all competitions for the second time this season, surpassing their lineup for the League Cup quarter-final against Aston Villa in December (19y 182d). Break. pic.twitter.com/iUM7BjIyvx

Liverpool’s youngsters may have been thrashed by Villa on that occasion, but last night’s win keeps dreams of a potential treble alive.

It also shows that LFC fans can surely expect a bright future from some of those coming up through the club’s academy.

19-year-old midfielder Curtis Jones has been particularly impressive in his outings for the Liverpool first-team this season.