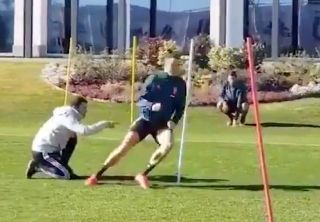 Cristiano Ronaldo celebrated his 35th birthday on Wednesday and the Juventus superstar is not letting up as he was busy training in midweek.

The Turin giants face Verona on Saturday night as they look to preserve their three-point lead over rivals Inter at the top of the Serie A table.

SEE MORE: As Cristiano Ronaldo turns 35, can he enjoy one last hurrah in the Champions League with Juventus?

Ronaldo will no doubt play an instrumental part in their bid to win major trophies again this season, as he’s bagged 22 goals and three assists in 27 appearances already.

As seen in the video below, the Portuguese international wasn’t about to let his birthday interrupt his insane commitment and determination to be in the best possible shape, as he posted a clip of his training session on Wednesday which involved what looks to be a brutal fitness drill.

Naturally, he makes it all look so easy as he has consistently been praised for his work ethic over the years by coaches and teammates, but Rio Ferdinand couldn’t help but have a cheeky dig at him.

While it’s surely not the case now, it would be interesting to know if he could indeed keep up with Ronaldo during his peak years at Old Trafford as they would undoubtedly have had some great battles in training during a successful period for the Red Devils.