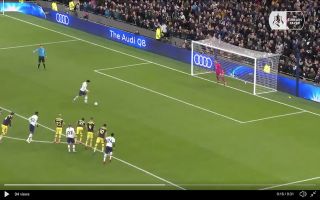 In the 86th minute of tonight’s FA Cup clash between Tottenham Hotspur and Southampton, Spurs won the chance to be victorious in the tie after being awarded a penalty.

England international Dele Alli played a stunning pass into Heung-Min Son and the Spurs forward was brought down by Saints goalkeeper Angus Gunn in the box as he attempted to round the stopper.

Son looked cool, calm and collected as he fired the penalty into the bottom corner to complete a late comeback for Spurs that’s sealed a place in the next round of the FA Cup for Jose Mourinho’s side.

Take a look at the South Korean star’s game-winning spot-kick below:

Super Sonny from the spot.

That ball from Dele, though ?#EmiratesFACup @SpursOfficial pic.twitter.com/CtBZbqAZfl