The 17-year-old has made 12 appearances for the Latics this season so far, scoring a goal against Hull City. According to Football Insider, Liverpool are interested in signing Gelhardt in the upcoming months before he turns 18. This report also claims that Manchester United and Chelsea are keeping close tabs on him as well.

Gelhardt whose current contract expires in 2021, has made only one start for Wigan this season so far which was against Sheffield Wednesday a few days back. The 17-year-old has made sporadic appearances in 2019/20 but could find more first-team opportunities the following season provided he maintains a good run of form.

Provided Gelhardt does sign for Liverpool, he will be an academy player and it’ll be pretty much impossible for him to find first team opportunities except in Cup matches. However, it could be useful for his development. The teenager could also spend a year or two in Wigan, get some first-team football and then move to a bigger club. 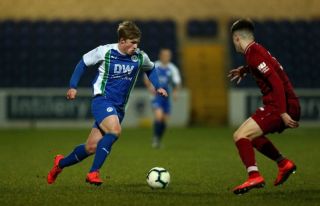