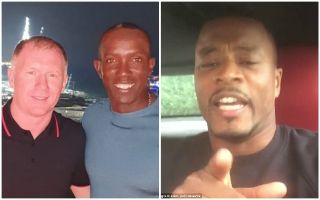 Paul Scholes ran into a familiar face in Dwight Yorke this week and the Man Utd legend posted a cryptic caption to accompany his photo on Instagram.

A lot has been made of the Man Utd frontline this season, and in recent years in fairness, as Ole Gunnar Solskjaer opted to let Romelu Lukaku and Alexis Sanchez leave last summer.

The responsibility of scoring goals has fallen on Marcus Rashford and Anthony Martial mostly this season, with youngster Mason Greenwood also pushing through.

However, United opted for a short-term solution in the January transfer window as they swooped for Odion Ighalo on loan for the rest of the season, and that has drawn some criticism from fans and pundits alike as well as former players.

Now, Scholes may well have just been commenting on Yorke being a top-class centre forward during his peak years, but Evra has interpreted it a different way based on his response to the caption.

No one but Scholes knows whether or not this was a sly dig at the signing of Ighalo and the standard that Man Utd have fallen from in recent years, or if he was just innocently commenting on a former teammate who played a huge part in Man Utd’s success.

However, Evra has had his say and jokingly suggested that his former teammate is having another swipe as he didn’t have to make a point of Yorke being a centre forward…