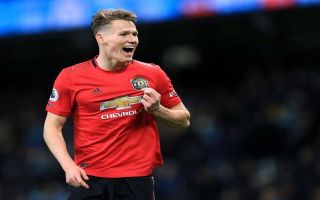 Manchester United star Scott McTominay has lifted the lid on the ‘very good first impressions’ that new signings Bruno Fernandes and Odion Ighalo have made in an interview with Sky Sports.

According to the Times (subscription required), the Red Devils signed Fernandes from Sporting Lisbon in a deal that could rise to a total value of €80m (£66.7m).

The Manchester outfit completed a shock deadline day move for Odion Ighalo, the former Watford striker will spend the remainder of the season on loan with his boyhood club.

Supporters should be delighted to see that McTominay is already singing the praises of the pair, despite them only joining in the late stages of the January transfer window.

Here’s what McTominay has to say on his new teammates:

“First and foremost they are good people and that’s what we need at this football club. We need good friends, who you can go out to dinner with.”

“What they bring onto the football pitch – we’ve seen that. Hopefully they can bring a lot for us. First impressions are very good.”

Scotland international McTominay is currently sidelined with an injury, but the ace has offered a potentially promising injury update to fans.

The Red Devils are currently 7th in the Premier League, Ole Gunnar Solskjaer will be hoping that new additions Fernandes and Ighalo can provide the cutting edge needed for United to cut the gap between themselves and rivals Chelsea, who are sitting in fourth place.