There was always going to be a problem with VAR if it turned out that the wrong decisions had been made, and this could be one of the first examples of admissions of fault being made.

Admittedly it’s not the ref in question who has owned up to this, but Dutch outlet Telegraaf has reported that a UEFA referee has admitted that there were errors made in the 4-4 draw between Chelsea and Ajax in the Champions League this season.

It seems there was a referee’s gathering where they discussed and reviewed multiple games and decisions, and this was one of them.

It gets worse because it seems they admit that these decisions negatively affected Ajax, and they would probably have qualified otherwise. That means they will miss out on at least €11.3m in prize money for not making the next round.

It’s a slippery slope to go down with the report also suggesting that various VAR decisions are being reviewed, so more clubs might start to kick off if they learn that they lost a game due to an incorrect decision.

The main decision seems to be the penalty and red card awarded against Joel Veltman, where the report suggests that the referees who reviewed the foul would have reversed it. 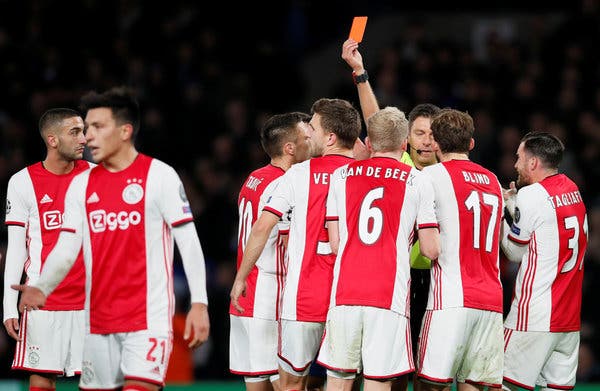 It seems the first red card shouldn’t have been shown

The big problem is that many fouls are still down to judgement and it can’t be exactly the same all the time, but hopefully this will help to iron out the inconsistencies and make it fairer across the board.

Not that this will be any consolation to Ajax right now, but if football can learn and improve then most supporters will be grateful.