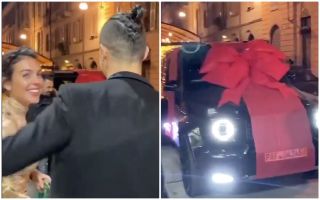 Cristiano Ronaldo celebrated his 35th birthday on Wednesday, and Georgina Rodriguez certainly delivered when it came to his present.

It was business as usual during the day for the Portuguese superstar as he posted on Instagram to show that he was busy being put through his paces in Juventus training, as seen in the link below.

However, he did manage to find time to enjoy his birthday as he seemingly had an evening out with his better half, and the night ended with a pretty expensive looking present.

As seen in the video below, Ronaldo looks genuinely stunned and surprised as he is greeted by friends with the luxury car parked in the middle of the street with a huge red bow on it.

According to the Daily Mail, he is now the proud owner of a Mercedes AMG G63 which is said to be worth around £114,336.

The pair took to Instagram to share more snaps of their night with Cristiano Ronaldo Jr also in attendance, and so it has to be said it’s not a bad way to celebrate turning 35.

It will be back to the day job for Ronaldo on Thursday though ahead of Juve’s clash with Verona on Saturday night.