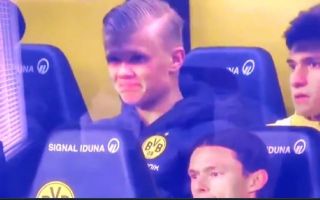 So much was said about Erling Haaland over the past few months, so it was always going to be interesting to see how he handled the step up from Austria to Germany.

If anything, his scoring record has become even more ridiculous after a sensational start to his time in Dortmund. He’s mainly been used as a sub, and he’s been spotted with a strange looking drink before coming on in a recent game:

Whatever disgusting ingredient he’s got in that drink… It’s working! ? pic.twitter.com/1j6A4N5LZq

Haaland’s pre match drink looks like something straight from the lab. Explains all of the goals, to be honest. pic.twitter.com/x8GWpXLEvj

It’s not clear what was in that bottle or if that really is the secret to his success, but it seems pretty obvious from his face that it was completely disgusting.