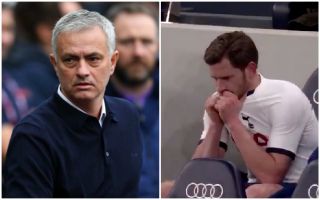 Tottenham boss Jose Mourinho has given his reaction after Jan Vertonghen’s incredibly sad reaction to being taken off against Southampton on Wednesday night.

Spurs eventually prevailed in their FA Cup fourth round replay as a late penalty from Heung Min-Son secured a 3-2 victory, but Vertonghen didn’t see out the game.

The Belgian stalwart was replaced by Gedson Fernandes in the 54th minute, and as seen in the video below, he looked utterly crestfallen as he took his place on the bench and it didn’t go unnoticed on social media.

However, Mourinho has downplayed the reaction as he believes Vertonghen will understand the decision to sacrifice him at that time, but given that his side won and how professional the experienced defender is, he’ll lift his spirits moving forward.

“No injury, it was my decision. It’s normal that he’s sad. No player likes to come out,” he is quoted as saying by the Evening Standard. “I decided to sacrifice Jan, so sad yes and with a reason to be sad, but happy now because he won.

“I don’t need to speak to him because he’s an intelligent guy. He’s very professional and it’s obvious that I did it not to punish because he was playing exactly the same as the others.”

It’s unclear as to why Vertonghen appeared so disappointed as ultimately it was beyond a normal reaction from a player. That said, it could be interpreted as him simply wanting to contribute to the team’s win and not watch from the sidelines rather than too much of a negative spin being put on it.

Tottenham are back in action against Aston Villa on Sunday, and so it remains to be seen whether or not the 32-year-old is involved having featured in two of the last four Premier League games.