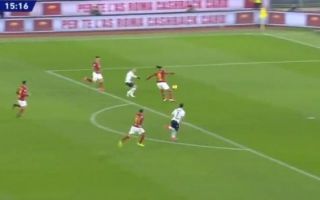 There was some clamour earlier on in the season for Chris Smalling to come back to Old Trafford and become a regular in the team again.

He started well for Roma, he was defensively solid and even managed to grab a few goals, but mistakes have started to creep in and he’s looking like the player we all saw at Old Trafford:

??? A moment to forget for Chris Smalling!

? The Roma defender decided to leave Barrow’s cross, and Orsolini swept it home to give Bologna the lead pic.twitter.com/DxkDWrYWpD

It’s an awful mistake and it’s not clear if he thinks there isn’t anyone there and the keeper should get it, or if he just makes a total mess of the bounce and allows it to run through.

Either way, it’s a pretty awful mistake from the Man United loanee.

READ MORE: Pundit claims Man United ace could move to their biggest rivals after being made a scapegoat