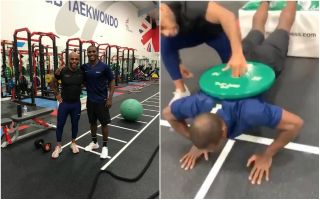 According to the Telegraph, Manchester United loanee Odion Ighalo has been completing double training sessions alongside Great Britain’s Olympic Taekwondo team in a bid to get fighting fit for the Red Devils.

Ighalo has enlisted the help of performance coach Wayne Richardson and the striker has been training with the founder of Richardson Sport at Team GB’s Taekwondo training facility in Manchester.

Ighalo’s dedication to get fighting fit is impressive, could United’s deadline day loan signing help the team push for a top four finish this season?

Fans can take a deeper look into Ighalo’s strenuous training by visiting the 30-year-old’s Instagram page and seeing his recent stories.

From a neutral perspective, we’d really like Ighalo to do well with the Red Devils, you can only imagine how he feels after completing a move to his boyhood club at the age of 30.

Ole Gunnar Solskjaer’s side could massively benefit from another centre-forward option, considering that Marcus Rashford is sidelined with an injury.