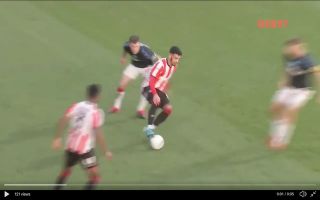 The Algerian ace effortlessly rolled the ball through Wing’s legs after picking up the ball in the corner, Benrahma bagged a second nutmeg on Wing just seconds later with a fine back-heel pass.

As reported by The Sun, Arsenal are now expected to join Leicester City and Newcastle United in the race to sign Benrahma,  it’s suggested that it could take a bid of up to £15m to convince Brentford to allow him to leave.

Take a look at the tricky attacker’s silky skills below: