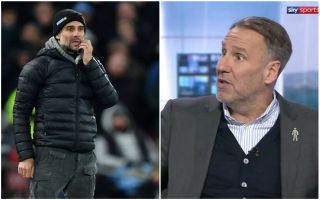 Former Arsenal star Paul Merson has questioned whether Manchester City boss Pep Guardiola is the ‘best manager in the world’ in a passionate rant on Sky Sports News this afternoon.

Merson voiced his disappointment on the uproar towards Liverpool manager Jurgen Klopp after the German decided to sit out the Reds’ FA Cup replay clash against Shrewsbury.

The retired England international even hinted that Guardiola would be able to ‘get away’ with missing a game in this manner.

Merson reiterated that City are ’22 points behind’ rivals Liverpool in the Premier League. It’s clear to see who the Sky Sports pundit believes is really the best manager in world.

Take a look at Merson’s damning thoughts on Guardiola below:

Merse doesn't hold back in a passionate rant about Pep Guardiola! ? pic.twitter.com/kqAPMptdJG

Klopp’s work with Liverpool over the last couple of years has been phenomenal, the former Borussia Dortmund boss will lead the Reds to their first league title in almost 30 years this season.

With the Merseyside outfit looking unstoppable against some top team this season, they’ve also shown that they have a solid chance of retaining the Champions League title this term.