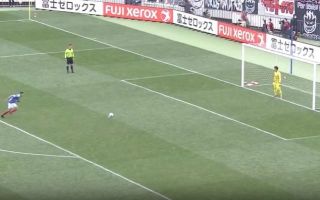 They always say that the penalty shootout is the ultimate chance for goalkeepers to become the hero, but this is just ridiculous.

The Japanese Super Cup final between Vissel Kobe and Yokohama FM ended following an exciting 3-3 draw, but that was nothing in comparison to the penalty shootout.

It all started well as the first four kicks were dispatched with no issues (including one from Andres Iniesta) but then it started to go crazy as nine kicks in a row were missed:

Thankfully it didn’t reach 10 in a row as Hotaru Yamaguchi stepped up to score the winning penalty for Vissel Kobe, but surely we won’t see anything like this again.