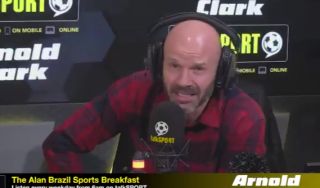 Pundit Danny Mills has appeared to genuinely question if Barcelona superstar Lionel Messi would get in the Manchester City team.

Messi’s Barca future has come into some doubt recently following reports of a public bust-up with club chief Eric Abidal, as detailed by the Guardian.

City have emerged as bookies’ favourites to sign Messi if he does leave the Nou Camp, and that’s a pretty exciting thought.

Mills, however, is surprisingly pessimistic about the prospect of Pep Guardiola landing his former player, who also happens to be perhaps the greatest footballer of all time.

“City’s the only club Messi could go to.”

“Messi is sensational but you would need to build the team around him.”

“You question ‘Where you do you play him?’ and ‘Instead of who?’”

Danny Mills questions if and where Messi would fit into #ManCity’s team.

Watch the video above as Mills chats about Messi’s future on talkSPORT, analysing the options for him if he were to move to the Premier League.

“You suddenly think … where would you play him at City?” Mills says. “Instead of who?”

No disrespect to Sergio Aguero, Raheem Sterling, Leroy Sane, Bernardo Silva, and the rest of them, but the easy answer here is that Messi gets in ahead of any of them.