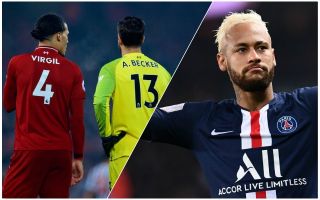 Neymar’s transfer from Barcelona to Paris Saint-Germain has been blamed for triggering the series of events that has led to Liverpool becoming hugely dominant.

The Reds have been on a major upward trajectory since midway through the 2017/18 season, with transfer business over the course of that season seeming to have a big effect on the club’s improvement.

MORE: Liverpool could offload £30m loanee in the summer

Virgil van Dijk joined Liverpool that January and was an instant hit with the club as they reached the Champions League final, with only Loris Karius’ two errors in goal gifting the win to Real Madrid.

LFC then spent big on new ‘keeper Alisson the following summer, and the Brazil international proved key in helping the Merseyside giants go that step further and win the Champions League in 2018/19.

Jurgen Klopp’s side now look unstoppable as they sit 22 points clear at the top of the Premier League, heading for what will surely be their first title victory in 30 years.

Writing in the Guardian, Jonathan Wilson has explained how Neymar started this all.

Discussing the problems at Barcelona, he wrote: “Luis Enrique offered a solution of sorts, grafting a celebrity trident on to the side that brought the 2015 Champions League while shifting away from the strictest definition of Guardiola’s philosophy. But Luis Suarez is ageing and injured, while Neymar left to pursue his own ambition, a huge transfer that should have allowed Barca to reconstruct their defence and midfield, but instead led to a pair of vain nine-figure splurges on glamour. The greatest effect of the Neymar deal, as it turned out, was to gift Liverpool the Philippe Coutinho windfall they used to become the best side in the world.”

Barcelona splashed out on Coutinho that same January that Van Dijk moved to Anfield, and the huge sum of money from that deal has been of huge benefit to Klopp, as he was also able to spend it on the expensive Alisson purchase, as well as Naby Keita, Fabinho and others.

Meanwhile, Coutinho has not been missed at all, despite being an important player for Liverpool during his time at the club. Instead, he flopped at the Nou Camp and is now out on loan at Bayern Munich, with his long-term future uncertain.

Had it not been for the Neymar move to PSG, Barcelona would surely not have been able to afford Coutinho or indeed feel the need to sign him, and then Van Dijk and Alisson quite likely would never have ended up at Liverpool at all.