Manchester United might have trouble fitting all their attacking midfield players into their team next season as they reportedly eye up both James Maddison and Jack Grealish to follow on from their January purchase of Bruno Fernandes.

The Red Devils do look in need of an attacking revamp after a frustrating season, and it seems they could really splash the cash this summer in an attempt to solve their problems in the final third.

According to the Sun, United could pay as much as £160million in total to sign both Leicester playmaker Maddison and Aston Villa attacker Grealish.

In fairness, with Alexis Sanchez majorly flopping in his time at Old Trafford and the likes of Jesse Lingard and Juan Mata not making much of an impact this season, maybe two signings in that area really is what’s required for Man Utd to be a force again.

See below as we take a look at how the pair could fit in to Ole Gunnar Solskjaer’s side, with this line up certainly looking a real improvement on what United have had to field for much of this season… 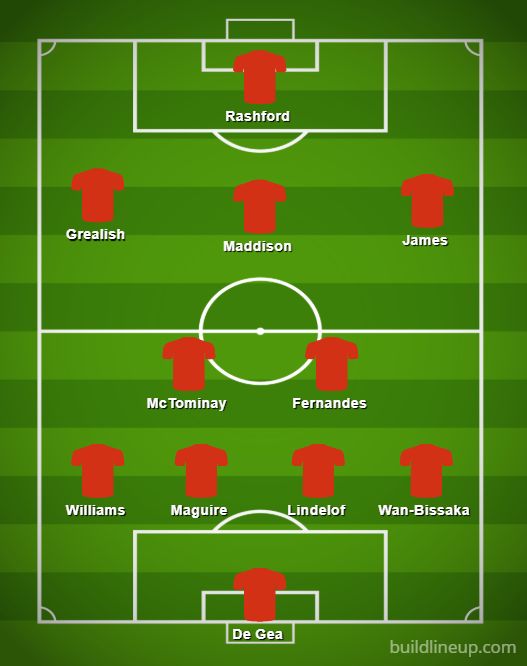 While Maddison is the number ten United so badly need, Grealish has often operated in more of a wide role anyway, so the two could both work best together in a 4-2-3-1 formation like the one above.

This would allow Maddison to be the main man in terms of linking up play, creating chances, and getting into those positions just outside the penalty area where he can be so deadly, whether with a dead ball or from open play.

Grealish could then use his pace and skill to cut inside from the left, joining Marcus Rashford almost as an extra forward, while the more natural winger Daniel James can provide the width from the right flank.

One imagines MUFC would also make other signings to strengthen other areas of their squad, but for now these two are the main names being linked with the club and just these two signings alone would surely improve Solskjaer’s side immensely.

Fernandes would have to make do with a deeper role, but he’s still good at joining the attack from there and he may also get the odd opportunity at number ten as Maddison won’t necessarily start every single game.