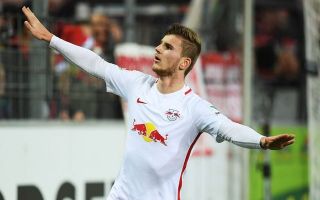 RB Leipzig have rather bizarrely responded to the growing Timo Werner to Liverpool transfer speculation that’s been doing the rounds today.

The Germany international is unsurprisingly dominating the headlines at the moment after a superb season in the Bundesliga, and it seems only a matter of time before he moves to a bigger club.

MORE: Klopp puts Liverpool “at the front of the queue” for potential £50m transfer

Reliable journalist Jan Aage Fjortoft has told Empire of the Kop that he has had Liverpool’s interest in Werner confirmed to him by several sources, and that Jurgen Klopp’s desire to work with the player puts the Reds at the front of the queue for his signature.

Leipzig themselves, however, have joked that they think the 23-year-old is heading to Tottenham, though this is presumably a reference to the fact that they’ll soon be playing each other in the last 16 of the Champions League.

We heared, he is headed towards #Tottenham though …

Werner, meanwhile, will no doubt be eager to show Premier League fans what he can do when Leipzig come up against Spurs in the Champions League later this month.