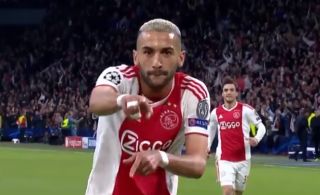 Hakim Ziyech has been a star performer for Ajax and it is in the Champions League that he’s really shown what he can do on the biggest stage.

The Morocco international is now heading for a big transfer to Chelsea this summer in what looks a hugely exciting move for the Blues, if these highlights are anything to go by…

Ziyech has scored goals of real quality in big games that matter, playing a starring role for Ajax in their surprise run to the Champions League semi-finals last season.

The 26-year-old netted a superb strike against Tottenham in the second leg of their semi-final clash, and Ajax ended up being extremely unlucky not to make it into the final.

Chelsea fans will also be delighted with Ziyech’s range of passing, with this viral beauty also coming in the Champions League…

Unfortunately, we won’t get to see more of Ziyech in Europe’s top club competition this season as Ajax failed to get out of their group this season.

But Chelsea look reasonably likely to be playing at that level next year, so we can hopefully look forward to Ziyech gracing the Champions League with his talent again soon.