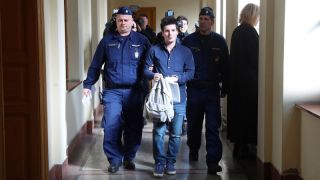 Man City were dealt a huge blow on Friday after UEFA banned them from European competitions for two years and hit them with a €30m fine.

The reigning Premier League champions will hope that their appeal to the Court of Arbitration for Sport is successful in either reducing or overturning the ruling, but as things stand, it looks as though there is a problematic period coming up for the club.

It all started with Rui Pinto – who the Sun note was the Portuguese hacker who gained access to club emails and gave them to the media to expose City after he sat down with Der Spiegel and leaked the information to them.

The 31-year-old was sent to prison for his role in the Football Leaks scandal, and after having an appeal denied on Thursday he will face trial for 90 different counts after being accused of hacking sabotage and fraud.

It’s added in the report that #freepinto began to trend on Twitter after City’s ruling was announced, as Pinto’s actions have been lauded by many for exposing those guilty of improper conduct, although it remains to be seen if the manner in which he gained the information will be part of City’s defence and argument with CAS.

Man City will now face an anxious period as they take their case to CAS and await a verdict, while it remains to be seen what happens with Pinto.