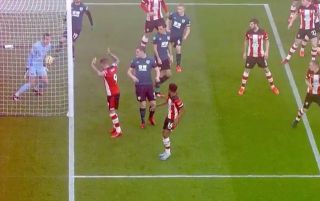 Burnley took an early lead against Southampton after just two minutes of their encounter on Saturday, with Ashley Westwood giving them the lead.

It’s a key battle for the two sides as they continue to try and move further clear of relegation trouble as they were seven points clear at the start of the weekend.

It could be argued a win for either side would end their concerns, and so the first goal was always going to be crucial.

Although it didn’t take long to arrive, it came in rather bizarre fashion as Westwood whipped in a corner in the second minute, and with the help of some troublesome weather conditions, he saw it squeeze inside the near post and across the line before it was knocked away by the goalkeeper.

As seen in the video, there was some rather questionable defending from Danny Ings at the near post as he misjudges the ball and simply moves out the way for it, believing that it’s going to hit the side-netting and go out for a goal-kick.

Unfortunately for him, he’s then left with his hands on his head as he sees the ball creep over the line and the goal is given, in what is a real early setback for the Saints and the forward will now be kicking himself for not making certain of blocking the ball rather than just letting it go.

Burnley take the lead inside 90 seconds…

And it's a disaster for the Saints!

A goal scored directly from a corner!

You do NOT see that everyday ? pic.twitter.com/TH7qjKz2TH

Gareth, are you watching? ?

What on earth was Danny Ings thinking?

Disaster from @SouthamptonFC in the 2nd minute, Ashley Westwood scores straight from a corner #SOUBUR pic.twitter.com/2DlH9WAHij