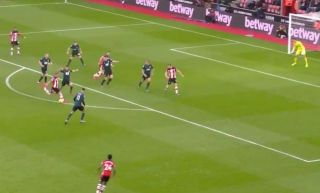 Danny Ings was left with his hands on his head after just two minutes of Southampton’s clash with Burnley on Saturday, but his mood soon changed.

The visitors took the lead at St. Mary’s after Ashley Westwood scored directly from a corner, although Ings misjudged the ball completely and let it pass him at the near post.

After seeing it cross the line and the goal was awarded, the Saints forward couldn’t believe it as his error could have been a costly early blow for his side.

However, he made sure he made amends soon after as seen in the video below, as he produced a clinical finish from outside the box to draw Southampton level in the 17th minute.

That’s now 18 goals for the season for Ings, and his reaction to the goal said it all as he looked delighted to make his mark in a positive way and having made up for his earlier blunder.

Danny Ings makes up for his earlier error with a brilliant finish to level the scores!

Ruthless in front of goal ? pic.twitter.com/dFBxBzsAyI

Danny Ings makes up for an earlier error!

Danny Ings just keeps on scoring, and what a way to move past his earlier mistake.#SOUBUR #PremierLeague #OptusSport pic.twitter.com/YUxX9JyyCm