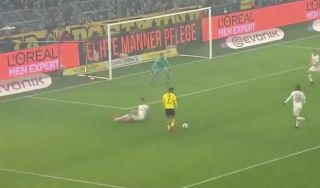 Jadon Sancho was on the scoresheet again on Friday night as he netted in Borussia Dortmund’s 4-0 win over Eintracht Frankfurt.

The win lifts Dortmund up to second place in the Bundesliga table for the time being, as they moved to within just a point of rivals Bayern Munich at the top of the standings.

Time will tell if that gap widens again over the course of the weekend, but coach Lucien Favre will no doubt be delighted that they managed to get their job done and can now sit back and watch the other teams in action.

It was a memorable night for Sancho though in particular, as he bagged his 13th league goal of the season which now makes that his best ever tally in a single season, and he’s done it in just 20 Bundesliga outings.

As seen in the video below, the England international did it in some style too as he showed brilliant composure to firstly take a superb first touch to allow him to bear down on goal before selling the defender a dummy and then finding the back of the net.

Still just 19 years of age, Sancho continues to show great quality and calmness in the final third to suggest that he will have a big future ahead of him…

Clinical and composed from Jadon Sancho ?

1??3?? league goals this season. His best-ever tally in a single season! pic.twitter.com/R8vJpiEFLV