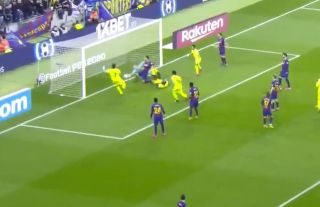 Barcelona appeared to be cruising against Getafe at the Nou Camp on Saturday, but they had Marc-Andre ter Stegen to thank for saving them in the second half.

Goals from Antoine Griezmann and Sergi Roberto put them in control before half-time, but Angel Rodriguez struck just after the hour mark to give the visitors hope of a comeback.

It could have been even better for them just minutes later as they threatened to find an equaliser, but unfortunately for them, they came across Ter Stegen between the posts for the Catalan giants.

As seen in the video below, the German shot-stopper does well to react to the first attempt on goal and keeps it out, but then he recovers superbly to prevent the rebound effort from being tapped into the back of the net.

It remains to be seen if it proves to be decisive in a Barcelona win or not, but it’s real class from Ter Stegen to reiterate his importance to the side even with all the attacking quality that they have in the squad…

The Barcelona goal keeper comes up with a huge save to keep the hosts in the lead.#LiveOnStrive pic.twitter.com/jB3qUV2VUX

Ter stegen is not human, without him barca would’ve been in the relegation zone pic.twitter.com/668JHIIya3