In the 61st minute of this afternoon’s Bundesliga clash between between Bayern Munich and FC Koln, Manuel Neuer showed that he’s still all about being a sweeper keeper at the age of 33.

The Germany international rushed around 35 yards out with spectacular speed before stopping Mark Uth in his tracks with a brilliantly timed tackle.

There’s a good chance that Uth would’ve scored if it wasn’t for Neuer’s heroics.

Neuer is showing that he’s still one of the world’s best goalkeepers, the German will go down in history as a true pioneer – it’s clear that the modern goalkeeper is moulded around the Bayern star.

Take a look at the World Cup winner’s brilliant stop below: 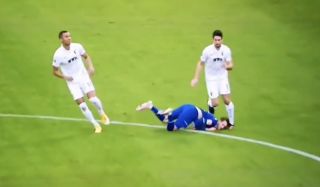