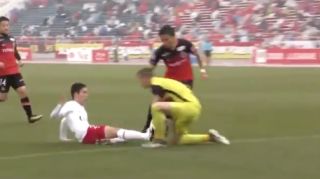 What should surely have been a dream debut for Kashima Antlers’ 18-year-old star, Yuta Matsumara, has turned into a nightmare.

Trailing 1-0 to Nagoya Grampus Eight in the Japan League Cup, and with eight minutes left to play, Matsumara was handed the chance to help get his side back into the game.

In the final minute the youngster burst into the area, evading two challenges in the process, but with only the keeper to beat, he allowed the ball to get away from him and his subsequent studs-up lunge connected with Grampus Eight’s keeper, Mitch Langerak.

It left the referee with no option but to send the debutant off, and was surely not the way Matsumara had expected things to end.

18-year-old Kashima Antlers midfielder Yuta Matsumura saw a straight red in the 9th minute of his debut appearance after a studs-up tackle on Mitch Langerak. https://t.co/rdP3RUNbVS