Chelsea and Manchester United meet in the Premier League tonight in what looks likely to be a huge clash in the context of this season’s top four race.

The Blues host the Red Devils at Stamford Bridge tonight and go into the game with a six-point lead over their opponents, which they will hope to extend with a win.

An away victory, however, would put United right back in this, and it’s worth noting that Ole Gunnar Solskjaer’s side have already beaten Frank Lampard’s men home and away this season.

Man Utd ran out emphatic 4-0 winners over Chelsea on the opening day of the Premier League season, and then bagged another win at the Bridge in the Carabao Cup.

Lampard’s side have been slightly more impressive overall this season, though, so it’s perhaps unsurprising they edge our combined XI, as seen below… 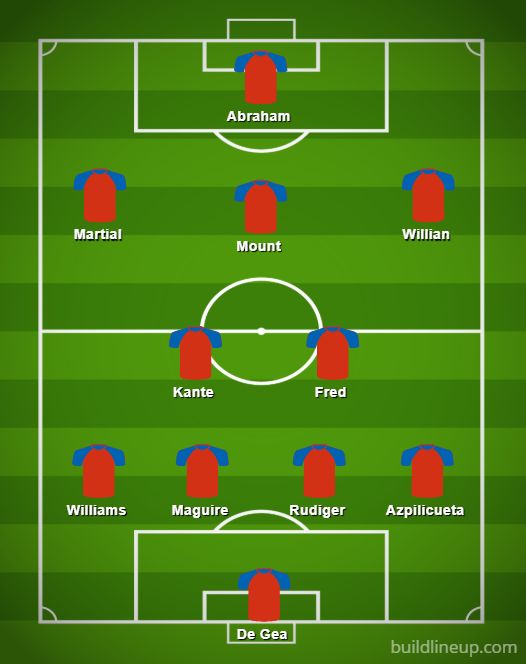 We’ve not included injured players like Paul Pogba and Marcus Rashford here, with the latter particularly likely to have made our side if he’d been fit, though not necessarily in place of Tammy Abraham up front, but perhaps ahead of his own MUFC team-mate Anthony Martial on the left.

It’s also surely too early to be including big-name January signing Bruno Fernandes as he’s played only one game for United since joining the club.

In general, the alarming thing about this line up is how weak it is compared to previous years when there were more world class players and big names in both squads.

However, Eden Hazard left Chelsea for Real Madrid last summer, and players like David de Gea and Willian now look a little past their peak.

Elsewhere, there are promising youngsters like Mason Mount and Brandon Williams, but we are certainly not looking at truly vintage United or Chelsea sides here.

It should still be a fine game this evening, however, and a potentially season-defining one for both teams.

For Solskjaer in particular, it could be the last chance for him to keep himself in the United job as speculation will no doubt intensify if he cannot steer this club back into the Champions League.