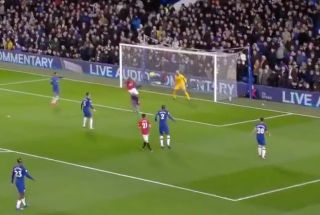 Man Utd struck first in their crunch showdown with Chelsea at Stamford Bridge on Monday night, with Anthony Martial getting on the scoresheet.

It was a tense encounter between the two sides battling for a top-four finish in the Premier League this season, and the first goal could be crucial.

As seen in the video below, there was some superb work from Aaron Wan-Bissaka in the build-up to the goal as he twisted and turned himself into space on the right flank before delivering a great ball into the box.

However, Martial still had plenty to do in order to get the right accuracy and power on his header, as he managed to get the perfect touch on it as he rose highest to send it into the far corner of the net.

It was a quality goal from Man Utd from start to finish, and they’ll hope to protect that lead in the second half now…

Manchester United are in front of Chelsea ? pic.twitter.com/kOSesZY4Sg

The deftest of headers from Anthony Martial ??