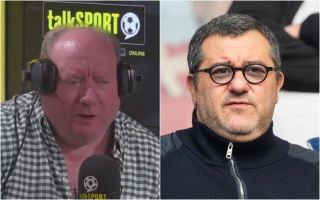 The talkSPORT host is at his brilliant best in this video below as he tears into Raiola for taking the mickey out of a great club in Man Utd, and it’s fair to say it’s about time someone put Raiola in his place like this.

"Manchester United are a massive football club and he is taking the mickey out of them." ?

"If they got £100m [for Pogba], drive him to the airport." @AlanBrazil on Mino Raiola's comments about Paul Pogba and Ole Gunnar Solskjaer. ? pic.twitter.com/rDem5Q2WEp

While the well-connected super agent is undoubtedly one of the best in the world at his job, he tends to rub a lot of people up the wrong way with some aspects of how he conducts himself.

Pogba has had a difficult time at Old Trafford and the media circus surrounding the Frenchman won’t have helped the Red Devils.

Brazil makes it clear in the video above that United should get rid of Pogba if the right money comes along, and fans would probably welcome that chance to get rid of both him and Raiola.