Robbie Burton has tweeted a classy farewell message to Arsenal fans and the club in general after leaving for Dinamo Zagreb.

The 20-year-old has today joined Dinamo Zagreb in a permanent transfer move, as confirmed on the Gunners’ official site.

It’s clearly not an easy decision for Burton, who has tweeted his thanks to everyone at Arsenal and explained how much the north London side means to him.

He says, however, that this seems to be the best decision for him and his career, which seems fair enough.

I would like to say thank you to everyone at Arsenal who have helped me and made me the player I am today. To leave a club that means so much to me is hard but the right decision for my career. I wish the club all the best in the future?? pic.twitter.com/4NhCcuPveU

As much as Burton looks a decent prospect, he’ll have hoped to have made more of a first-team breakthrough at this stage of his career.

There’s plenty of competition at the Emirates Stadium, so it seems unlikely that would have happened any time soon, even if Arsenal do have a good record of trusting and developing their academy players.

Bukayo Saka has been a particular hit in the senior Arsenal side this season, taking the opportunity that’s come his way with both hands.

This couldn’t happen for Burton, but it will be interesting to see what the youngster can go on and achieve in Croatia. 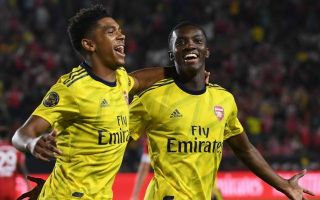