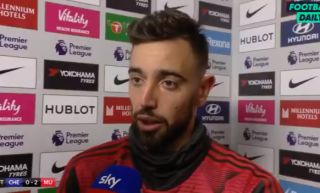 Bruno Fernandes has enjoyed a great start at Manchester United, and it seems clear he’s loving life at Old Trafford.

Watch the interview in the video below as he calls the Red Devils the biggest team in England – and while this clearly isn’t true at the moment, it is the kind of thing you have to say, and it shows the right attitude.

Bruno Fernandes: "I play for the biggest club in England" ??

This man is classy on and off the pitch. I am falling in love with this guy. Baller. pic.twitter.com/Gd0uXhUiIW

United fans will love this positivity from their January signing, who really pulled the strings for Ole Gunnar Solskjaer’s side in a big win over Chelsea at Stamford Bridge last night.

The Portugal international’s corner set up Harry Maguire’s goal to make it 2-0, and there are perhaps early signs that he’s going to end up being a more successful signing than some other previous big-name additions who’ve majorly flopped at United.