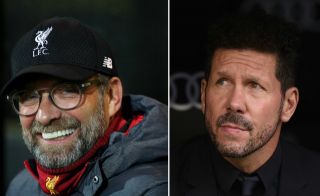 Atletico Madrid are aiming to do something ten teams have tried and failed to do against current Champions League holders Liverpool.

The Madrid club are looking to beat Liverpool in the last-16 of the Champions League despite the Anfield club’s stellar recent record in Europe.

As seen in the tweet below, Liverpool have not lost a two-legged European cup tie since Jurgen Klopp’s arrival at the club.

Atletico are up against the most formidable team in Europe in Liverpool and Diego Simeone is looking to beat Jurgen Klopp’s Reds over the course of the two legs against the Anfield club in the Champions League this season.

Liverpool are currently 25 points clear at the top of the Premier League and are yet to lose a game in the league this campaign, dropping just two points in a draw against Manchester United all season.

Atletico, on the other hand, are 4th in La Liga, 13 points adrift of league leaders and city rivals Real Madrid.