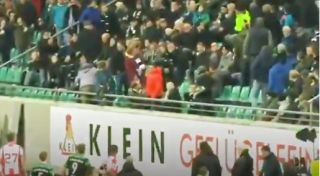 There were ugly scenes over the weekend as Porto striker Moussa Marega decided to leave the pitch after being subjected to racist abuse – with his team-mates physically trying to stop him from going off instead of defending him.

This German football team showed how it’s really done, focusing on those who are actually guilty and getting a racist fan removed from the stadium.

The entire football stadium stood up for him, booing at the heckler and chanting, 'Nazis Out'.#Football pic.twitter.com/m4jVSUfhO4

The crowd then went on to cheer “Nazis out!” in solidarity with their player.

A few could do with watching this and learning to focus their energy on being offended by actual racism rather than the response to it. No one should be made to play on in these conditions, and it’s up to the footballing authorities to deal with it, and for the rest of us as fans to challenge anyone we see using unacceptable language.