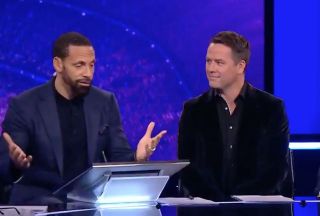 BT Sport pundit and Man Utd legend Rio Ferdinand has admitted that he can see a period of dominance coming up for Liverpool.

The reigning European champions remain on course to defend their crown this season as they prepare to face Atletico Madrid in the Champions League round-of-16, with the first leg taking place on Tuesday night in the Spanish capital.

SEE MORE: “Liverpool is the most likely destination” – journalist calms fears Reds could be beaten to major transfer

Further, they are 25 points clear at the top of the Premier League table as things stand, and so it seems merely a matter of time before they topple rivals Manchester City and end their wait for a league title.

In turn, the facts speak for themselves and Ferdinand has admitted, rather begrudgingly given his past with their old rivals United, that he can see Liverpool dominating moving forward, as seen in the video below.

Fellow panelist Peter Crouch added that he doesn’t see his former club losing their top players anymore as they have done over the years as seen with the likes of Raheem Sterling, Luis Suarez and Philippe Coutinho.

Further, he believes that the entire situation has now flipped round and the top superstars, such as Kylian Mbappe, will see what Liverpool are achieving and building and will want to be part of that under Jurgen Klopp.

The focus in the more immediate future will be winning the Premier League and going back-to-back in the Champions League. Beyond that, with the squad that they’ve assembled under a world-class manager like Klopp, there could be much more on the way for the Merseyside giants as Ferdinand admits.

"I'm looking at players like Mbappe… Top, top class players will want to come to Liverpool."

"Everyone in world football would want to work under Klopp!"@petercrouch and @rioferdy5 believe Liverpool no longer have to worry about losing their best players ? pic.twitter.com/y8h790vMCW