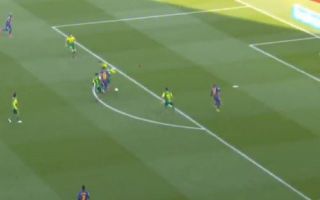 There’s been so much talk this week about Martin Braithwaite that you could almost be forgiven for forgetting that Barca still have Lionel Messi and Antoine Griezmann.

The lack of options up front means they will have to rely on Messi more than ever, but that’s not exactly an awful position to be in.

He gave them the lead today against Eibar as some great skill takes the defence out of the game before the cheeky dinked finish capped a fantastic solo goal:

is that even real !?#Messi pic.twitter.com/bRFkUnlAxu

They do face a big trip to Napoli next week, so a few more goals in this game could allow Quique Setien to give his big players a rest.