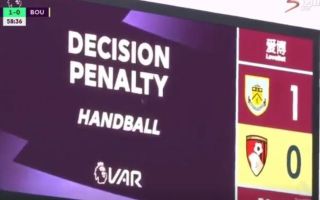 Just when you thought we were done with the VAR controversy for one day, it turns out things were just getting started.

You can possibly argue that this is the correct decision, but it looks so harsh and it just highlights how ridiculous things can become.

Harry Wilson thought he had leveled the game up for Bournemouth with a nice goal, only for VAR to rule out the decision due to a handball.

Not only did they have the disappointment of having the goal chopped off, the “handball” was in their own box so a penalty was awarded against them instead:

WOW! Bournemouth are being destroyed by VAR here. 2 disallowed goals for apparent ‘handballs’. It really takes away from the skill of Bournemouth on the counter attack and instead of it being 1-1, its 2-0! ????????#BURBOU #Bournemouth #varout pic.twitter.com/jnqpNJ550G

Dubious handball decision that gave Burnley a penalty and ruled out a Bournemouth goal.. I’m not sure it even hits his arm.. pic.twitter.com/Aa3QOiiCgb

The real irony here is that the penalty probably doesn’t get given if Bournemouth don’t score. There’s not enough to award it on it’s own, but the rules state any handball in the build up to a goal can’t count, so they had no choice to award the spot kick instead.

Bournemouth had already had a goal disallowed in the first half for a harsh hand ball call, so you imagine Eddie Howe won’t be that keen on VAR right now.