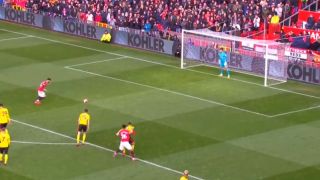 Bruno Fernandes has scored his first goal for Manchester United, slotting away an ice-cool penalty to make it 1-0 in today’s game against Watford.

The Portugal international has impressed since joining the Red Devils from Sporting Lisbon in January, and fans will hope this strike will be the first of many at Old Trafford.

Watch the video clip above as Fernandes steps up confidently before tricking the opposition goalkeeper with a little skip before making contact with the ball.

He then rolls it in calmly, much like the technique adopted by Chelsea midfielder Jorginho.