The Champions League is not a competition that’s been kind to Philippe Coutinho, but it could offer him a significant reprieve as he travels with Bayern Munich to take on Chelsea this week.

Coutinho, on loan at Bayern for the season, goes into this game facing an uncertain future, and could therefore be justified in seeing this big match under the Stamford Bridge lights as an audition for Premier League transfer suitors this summer.

MORE: Liverpool legend names the player who could be harmed by possible Philippe Coutinho transfer return

The Brazil international has not had the bounce at Bayern that he would have hoped for, with just seven goals and eight assists in all competitions since arriving on loan from Barcelona.

According to the Daily Express, Coutinho’s asking price has now been cut to just £77million as Barca clearly anticipate making a major loss on the player they splashed out so much money on to sign from Liverpool in 2018.

That season, the former Reds playmaker gave up on Champions League football for the second half of the campaign, as the cup-tied rule was still in place and prevented him from playing for Barcelona. His old club Liverpool, meanwhile, reached the final without him. A year later, they dumped him out of the competition at the semi-final stage in the most humiliating way possible in that memorable result at Anfield.

Coutinho was anonymous – one of just two Barca players given a 0/10 rating by Sport as shown in the picture below – as Liverpool came from 3-0 down on aggregate to win 4-0 on the night and go through to the final that they would go on to win. Most damning for Coutinho, perhaps, is the fact that his old club have not once looked like missing him, and it seems unlikely they’d now take him back. 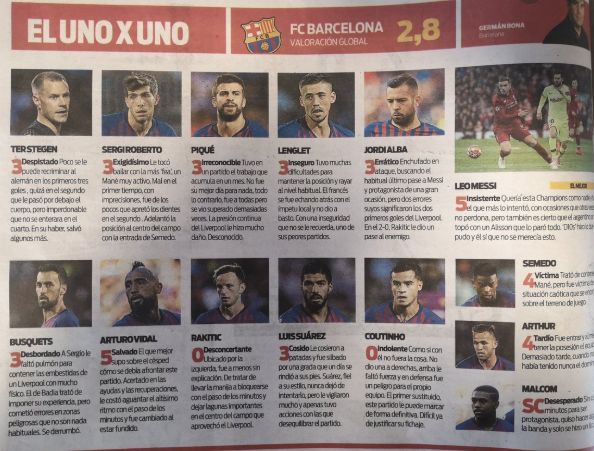 It’s a remarkable turn of events for the 27-year-old, who lit up the Premier League during his time at LFC, and who would surely be a European Champion himself by now if he’d just made a number of better career moves down the years.

Bayern are probably just a tier below the main favourites for this season’s competition, and Coutinho doesn’t look likely to have much of a positive impact in that department after such an ineffective campaign. Still, a good game away to Chelsea could be just enough to win over the right audience.

As noted by the Express, the Blues are among the clubs mentioned as potential suitors for Coutinho, as well as Manchester United, Manchester City and Tottenham. Former club Liverpool are also mentioned, and while that seems a little fanciful, perhaps their connection with the player means they could still be persuaded.

There’s no doubt Coutinho’s finest moments in his career so far have come in England, so he could well be relishing this return on Wednesday night. A youthful Chelsea side are there for the taking, and a goal and an assist or two in this tie could be worth more than double figures across a whole Bundesliga season anyway.

There would surely be no better time for this serial under-achiever to finally find his feet on this stage.