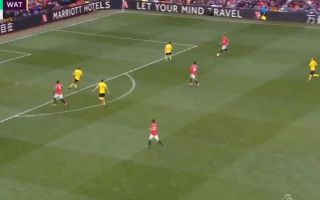 When Marcus Rashford went down with an injury you could rightfully wonder where Man United’s attacking threat would come from for the rest of the season, but the other strikers are starting to wake up.

Anthony Martial scored a fantastic goal earlier in the game, while Mason Greenwood showed how clinical he can be with this emphatic finish after a nice move:

Bruno Fernandes even scored in the game so it looks like being a great afternoon all round for Ole Gunnar Solskjaer and his team.