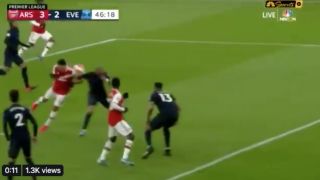 With Everton having drawn level at Arsenal in first-half injury time, the last thing Carlo Ancelotti would’ve wanted was for his side to concede an early goal after the break.

However, that’s precisely what happened after some poor marking in the penalty area allowed Pierre-Emerick Aubameyang to powerfully head home his second of the match, Arsenal’s third, to put the Gunners back in the lead.

In a real see-saw battle at the Emirates Stadium, Arsenal’s captain is leading by example.

Aubameyang gets his 2nd. #afc pic.twitter.com/d9fwbSUlUY

He’s now the joint top-scorer in the PL! ? pic.twitter.com/jZGJ51qASk