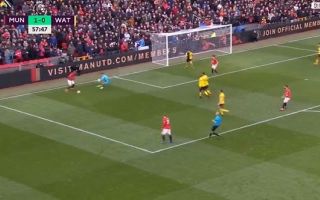 Man United’s front line has taken a lot of criticism this year with the exception of Marcus Rashford, with many fans thinking that Anthony Martial needs to be doing more.

In fairness, he is very inconsistent and his head tends to go down when things aren’t going his way, but this goal shows exactly what he can offer when he’s at his best.

It looks like the chance is gone, but this is pure class:

Anthony Martial, that was beautiful ?pic.twitter.com/C63rSiUtEW

It’s a huge goal because it came just minutes after Watford thought they had equalised only for VAR to step in. A win here would take them up to 5th, which could secure Champions League football next season if Man City’s ban stays in place.