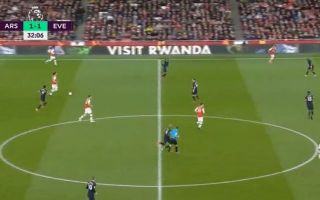 This looked set to be yet another frustrating home game for Arsenal after Everton took an early lead, but things have quickly swung back in their favour.

Carlo Ancelotti has turned Dominic Calvert-Lewin into a goal scoring machine since his arrival and he struck first, but then Eddie Nketiah leveled things up.

It’s a surprise to see him starting for Arsenal after a frustrating spell at Leeds, but the anticipation and finish here is outstanding:

Saka bags another assist to his amazing season. Nketiah is a fox in the box.
Arsenal 1-1 Everton #ArsEve
pic.twitter.com/x7h9rnE3c7

Things got better shortly after, as David Luiz strode forward to send Aubameyang through on goal and his finish was never in doubt either:

Aubameyang’s goal to give Arsenal the lead! pic.twitter.com/O65oTUHQeN

There was a lot made of Bukayo Saka starting on the bench but he was forced into action earlier than expected and his cross for the first goal is outstanding.

There’s still a long way to go, but seeing the youngsters come up with big contributions must be great to see for the fans.