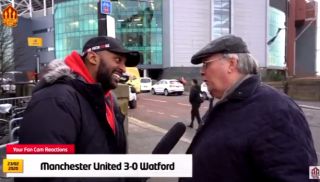 One Manchester United fan seems to be getting a bit carried away after a few decent results in the Premier League.

Just watch this bizarre exchange below as one Red Devils supporter genuinely seems to claim he’s struggling to think of a better left-back in the world than Luke Shaw.

Now, Shaw has been in fine form recently, but it’s his lack of consistency down the years that’s really hurt him, and it’ll take more than a few good games to really show anyone he’s improved.

The England international would surely be embarrassed to see this video, with even the United Stand presenter laughing in disbelief at his interviewee’s claims.