Even if you have no idea about politics, or you’re one of our readers based outside the UK, it is almost impossible not to have heard something about Brexit in the last four years.

This huge political phenomenon has been hugely divisive in the UK and what it means for the country’s future is still far from clear.

On top of that, it is likely to have ramifications in Premier League football soon enough, so we’ve put together a handy little guide to explain what it all means and what it could do to the English game…

Firstly, what is Brexit?

While the referendum result did not automatically trigger the country’s exit from the bloc, this has since been activated by former UK prime minister Theresa May triggering Article 50 in 2017. After years of uncertainty, a general election win for her successor Boris Johnson in December 2019 has cemented Brexit, with the UK leaving on January 31st this year.

As of yet, nothing has changed regarding Premier League rules on overseas transfers as the country has entered into a transitional period for 2020, with any potential effects of Brexit unlikely to be felt until 2021.

Did Premier League clubs want it?

Not a single Premier League club supported leaving the European Union, with the move proving unpopular with plenty of businesses. One imagines that the potential complications that could now come with signing overseas players will have played a big part in that.

What will it mean for Premier League transfers?

This is still to be decided, but it is likely that players from the EU will now face the same requirements as those from South America and other parts of the world.

For the most part, this shouldn’t change too much, but it will mean players are more likely to be required to have played regularly for their national teams before being granted a move. This would previously have meant big names like Cesc Fabregas, N’Golo Kante and Anthony Martial may not have ended up in the Premier League.

In the past, clubs have got round this by signing a player and loaning them out for a few years before bringing them back, with Carlos Vela at Arsenal a notable example, so this could become increasingly the norm for some European players as well.

Will this open up transfer potential across the rest of the world?

This is an idea that has been floated, but it’s not yet certain either. The FA have offered to loosen requirements needed for all overseas players to move to England, which might in theory mean the international caps requirement is no longer an issue.

However, the Premier League have rejected these proposals so far, with all sides said to be at an impasse.

Which clubs could be hit the hardest?

As per this graph from the Financial Times, Wolves have been the club most reliant on EU players this season, with Arsenal, Chelsea and Manchester City not far behind.

It is clear, however, that most clubs benefit from having EU players making up large parts of their playing squads… 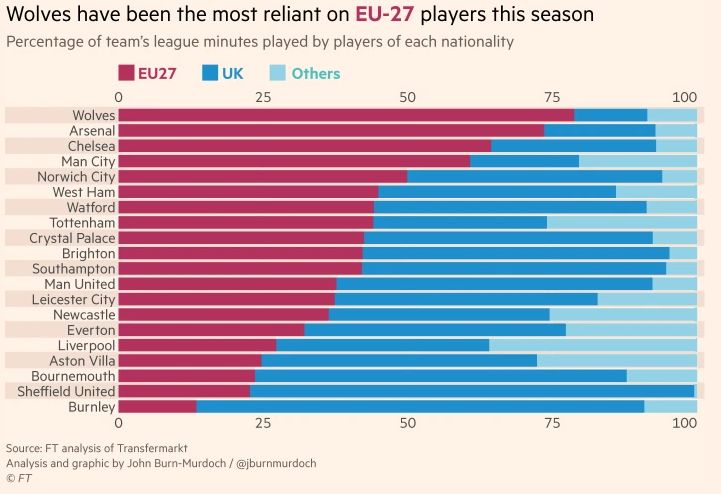