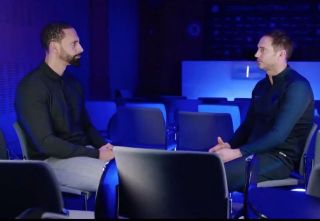 In a fascinating interview for BT Sport, Chelsea boss Frank Lampard has revealed all on the decision to return to Stamford Bridge as manager.

The Blues boss sat down with pundit and former teammate Rio Ferdinand ahead of their clash with Bayern Munich in the Champions League on Tuesday night.

SEE MORE: “We need to be quiet, be smart”- Chelsea star speaks out on Bayern clash

Among various topics covered by the pair, Lampard was asked about the decision to take the Chelsea job and whether or not he had doubts over his ability to be successful so early in his coaching career.

As seen in the video below, Lampard offers a very honest and open response as although he did concede that he knew there were doubters, he couldn’t turn down the opportunity to return to a club where he enjoyed such great success and times as a player.

While he referred to Chelsea as ‘my club’ at one stage which will no doubt gain a positive reaction from the Blues faithful, he also insisted that he wasn’t scared about the possibility of his managerial stint not going to plan and ending in disappointment.

That’s ultimately the attitude that he had to adopt, and while Chelsea look to try and hang on to fourth place in the Premier League this season, if they can achieve their objective of qualifying for the Champions League, it could be something to build on for Lampard moving forward.

With their transfer ban now over, he will have the freedom to strengthen his squad where he feels necessary this summer, and he’ll hope that he can start to put the building blocks in place to enjoy an extended reign at Chelsea having leaned heavily on several youngsters this season.

As seen in the video below though, there were seemingly no hesitations or major concerns to put him off from taking the Chelsea job at this stage of his career…

"I couldn't turn it down, it's my club. I wasn't scared of the idea of it going wrong."

Frank Lampard speaks to @rioferdy5 on the challenges of management and returning to lead the club where he became a legend.

This is a must-watch.#RioMeets Chelsea | 6.30pm | BT Sport 2 HD pic.twitter.com/ZM7yFFMxIz