Liverpool may not win the treble or go an entire season unbeaten this season, but they’ve already matched Manchester United’s treble winners for points and Arsenal’s Invincibles for wins in the Premier League this term.

On top of that, they’re now on 79 points for the season already – the same total Man Utd finished on when they won the treble in that memorable 1998/99 campaign.

They’ve also won 26 games out of 27 so far, meaning they’ve already matched Arsenal’s win total when they went the season unbeaten in 2003/04, with 26 wins and 12 draws that year. 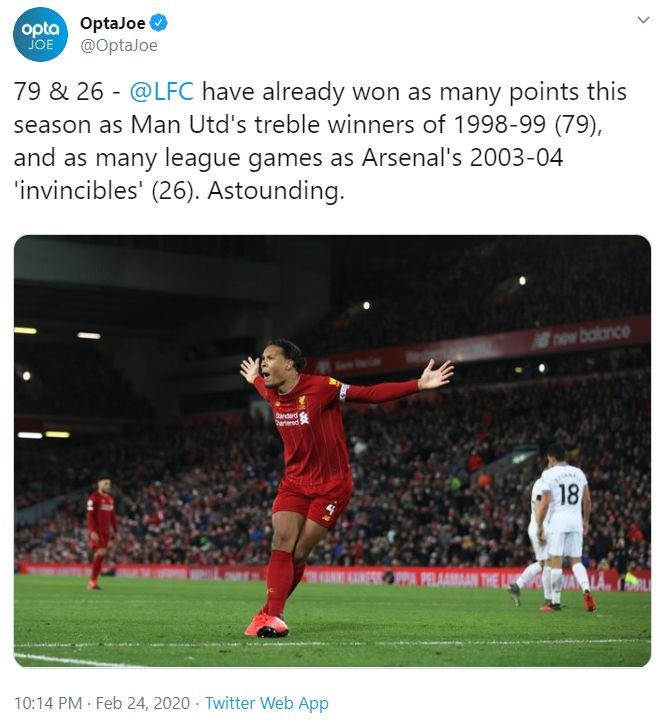 Liverpool have 26 wins and one draw so far and will now have their eye on matching Arsenal’s record of 49 top flight games unbeaten.

Arsenal pushing to secure loan signing of Juventus star after club director holds meeting with player’s agent
Ex-Red Devil expects Man United to give more chances to youngster who “plays without fear”
Tottenham in talks over ambitious transfer raid, player came “very close” to joining in the past

The Gunners set that incredible record over the course of 2002/03, 2003/04 and the start of 2004/05, and Liverpool now just need six more league games without defeat to overtake them.

On current form, you wouldn’t bet against Jurgen Klopp’s side doing that and making even more history.