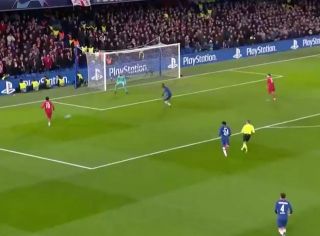 Bayern Munich have put themselves in an extremely strong position to knock Chelsea out of the Champions League in their round-of-16 tie.

The visitors ran riot at Stamford Bridge in the second half of their first leg meeting, with Serge Gnabry scoring twice in quick succession to silence the home crowd.

That in itself was a hugely damaging blow for Frank Lampard’s side and their hopes of advancing, but the damage wasn’t finished there.

As seen in the video below, there was some superb work from Alphonso Davies down the left flank for Bayern as he broke free and put in a perfect cross for Robert Lewandowski to tap home.

Question marks could perhaps be raised over the defending, but ultimately it was great work from the 19-year-old to produce another assist, and Lewandowski had an easy job to arguably put the tie to bed with Chelsea now needing to produce a major comeback.

Lewandowski's first goal in the knockout stages in two years!

Put on a plate by Alphonso Davies, absolutely rapid ? pic.twitter.com/JaVHwcxsmT

Alphonso Davies is having a field day and sets up Lewandowski's 11th UCL goal this season ? pic.twitter.com/SgUASFTMM6

The tie could be over already! ?

Alphonso Davies just makes it look so easy… What a left back man ? Who else but Lewandowski there to finish it off ?? #CHEBAY pic.twitter.com/uXuqnTtjCT